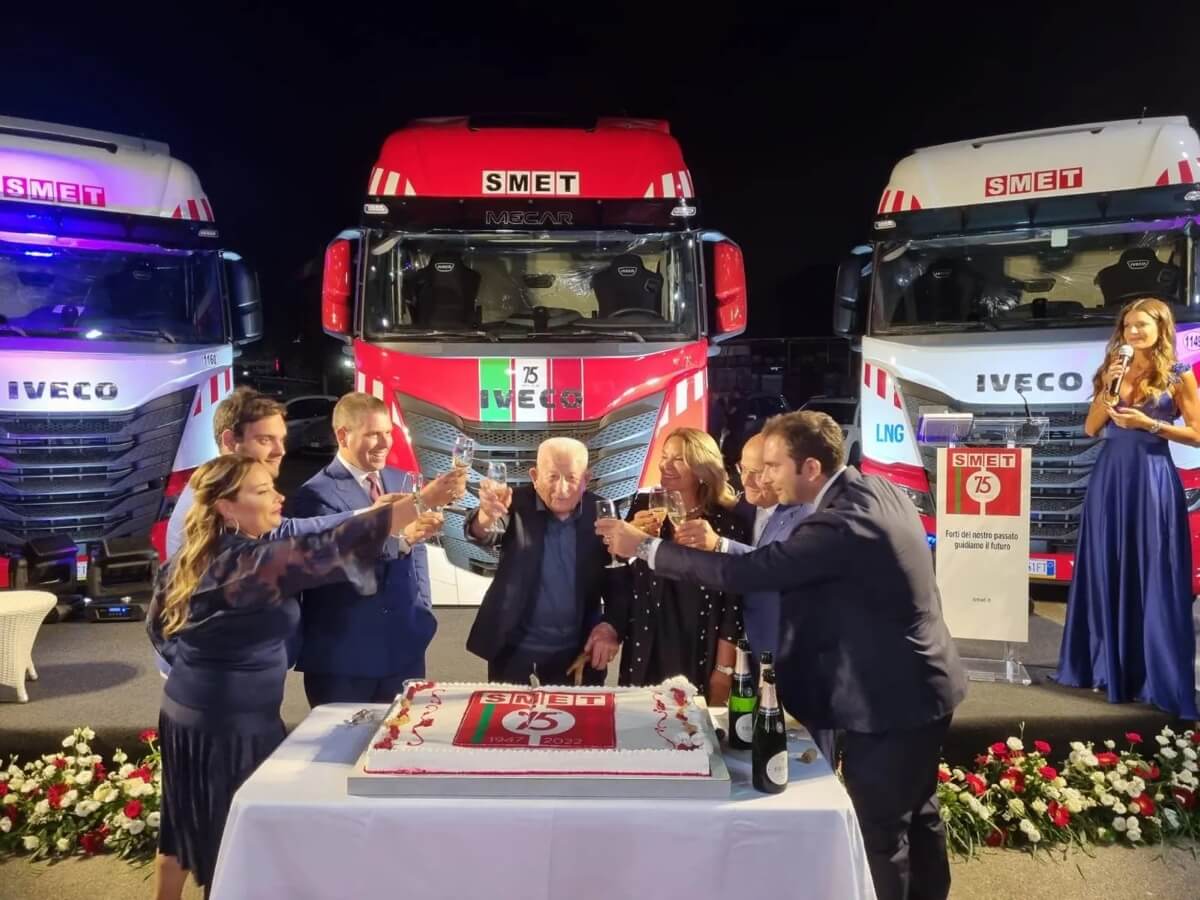 A celebration of the group’s 75th anniversary was held at the Easy Fuel Spa in Salerno, adjacent to the SMET Group’s large complex. A very important milestone for the entire De Rosa family, starting with Domenico De Rosa senior, 93 years of energy and passion, who back in 1947, when he was only 18 years old, decided to throw himself into the world of transportation by founding what is now a leading company in the Logistics sector, in Italy as well as throughout Europe. From the early beginnings, from the first challenges in a complicated but opportunity-filled period like the postwar period, to the transformation, with his son Luigi, to a corporation in the late 1970s and the bombastic 1980s. An epochal passage that marked the definitive consecration of SMET until the process of endless expansion that took place with the handover of the company to the current president, Domenico De Rosa junior. So many challenges: from the continuous innovation and renewal of the vehicle fleet to the ecological and digital transition of a company with more than 2,000 employees, 30 operating locations throughout Italy and as many as 5500 loading units. A giant that has relied on great partners such as Grimaldi Lines, an international leader in the ship logistics industry.

Presented by host Enza Ruggiero, there were many personalities who wanted to pay tribute to the De Rosa family: in the front row, alongside the current CEO, Guido Grimaldi, head of Grimaldi Lines, president of ALIS, Association of Sustainable Logistics, and a close friend of Domenico, with whom he shares the burden of generations. «For Domenico and me, comparing ourselves to our grandparents, our parents – Grimaldi said later in his farewell remarks – was difficult. We had giants behind us that we had to deal with every day. And if you don’t have quality, sense of sacrifice, dedication and vision, you don’t go anywhere.»

Obviously the full family, with siblings Lorella, Andrea and Gianluigi, who with Domenico De Rosa have been running the company for years. Then Gabriele Ferrieri, president of Angi, the National Association of Young Entrepreneurs, of which Domenico jr is a member of the CTS, and Hon. Piero De Luca, Hon. Federico Conte, and Hon. Andrea Volpe, who wanted to greet the De Rosa family and be present to celebrate this great achievement. And also entrepreneur Donato Di Canto of Di Canto S.p.A., Massimiliano Perri, head of Iveco’s Italy market, the administrator of Terminali Italia of the FS Group, Giuseppe Acquaro, attorneys Lello Ciccone, Giuseppe Lucibello, Roberto Malinconico, Gianluca Masullo, Marco Capece, and ASI President Antonio Visconti.

It was with memories of the beginnings of this great Italian adventure that the evening kicked off, with speeches by Domenico senior, progenitor of the De Rosa family, and Luigi. «I am overjoyed at how my son and grandchildren are running this company that I founded» said an emotional “Don Mimì,” «And I want to thank the staff of a company that in 75 years has not seen a single day of strike. We are a family, not only we De Rosa but with all our staff over these 75 years. My greatest satisfaction today is to see you here».

«I inherited the company that I turned into a corporation in 1975» Luigi De Rosa recounted immediately afterward, «A difficult undertaking, especially here in the South. But we made it, with a lot of sacrifice, dedication and two characteristics that my father taught me and that I think I have successfully passed on to my children: method and discipline».

The first difficult entrepreneurial choices, the relationship with the first clients, the first contracts until the recognition, in 2017, of the nomination as a Knight of Labor. From the Americans at PPG to convincing FIAT to be entrusted with its logistics. «Winning the trust of these big giants was difficult but we did it» added Luigi De Rosa, «The nomination as Knight od Labor was a recognition that was a source of great pride and made me feel even more responsible for what has been done and what still needs to be done and that my children are carrying out. To the young people I want to tell them to still have confidence and courage. They must dare, propose themselves. The future is theirs, even if we are going through very complicated times. There is an Italy to be refounded. Now is their moment».

Then it’s the turn of the younger generation. And here comes on stage Domenico De Rosa, the current CEO. «Many times I speak in public, even in front of ministers, secretaries, and other figures in Italian industrial and political life» De Rosa began, «but speaking after my grandfather and father is really difficult and exciting. I grew up with their model. All I did was replicate what I saw from them and try to actualize it with my own personal characteristics. My father talked about method and discipline. Without him there would have been no continuation of that model of order and discipline on which we in SMET have always rested. Not only in the company but also in the family».

A symbiotic relationship with employees and partners, for whom De Rosa had sweet words to say, «Some paths, however, are never made alone» the CEO added, «Our success is based on respect for people, on relationships. I received so many messages of congratulations and closeness for these 75 years that filled me with pride. It means that something really strong has been done, beyond the economic figure and the expansion of the company. Two words I would highlight: reliability and credibility, daughters of the value base given to me and my brothers who are by my side every day».

At the end of the speeches came the unveiling of the 75th anniversary celebration vehicle, an Iveco-branded behemoth created just for the occasion. There was also no shortage of time for the exchange of plaques, presented by Domenico De Rosa junior to his father and grandfather, while a special recognition came from the Grimaldi family for the De Rosa family and the entire SMET Group.

They then talked about what is to come, the next challenges and the future. De Rosa first and the president of Alis and head of Grimaldi Lines later. «In the future we will be there» De Rosa said emphatically, «We will play our part and we will be bigger than we are today. We have a packed program of activities to do and to develop. And we will talk about ecological transition, digital, youth policies, innovation, infrastructure and much more. These are all topics on the agenda».

«I think of SMET today, a titan, an excellence, the first group in Southern Italy and I hope before long in Italy» Grimaldi recalled, «Often with Domenico we said to each other why not move everything to Rome. But the answer was always the same: we are too attached to our territory. How many times we were attacked saying that in the South we are brilliant, however, then we get lost. They talk to us about the art of making do, at which we Southerners are masters. Luigi De Rosa, however, spoke of method and discipline. And when a Southern company has method and discipline, there is no company in the world that can compete. We must try to remain rooted in our territory, with our feet on the ground and have humility and sensitivity, qualities that are the foundation of an entrepreneur. Values that are often lost. To the young people of the South I can only say that there are great opportunities in our industry: don’t leave, stay with us. I assure you that there are still many great things to be done».

It is possible to relive the celebratory event here: