The story of Scania, the V8-shaped house of the Gryphon 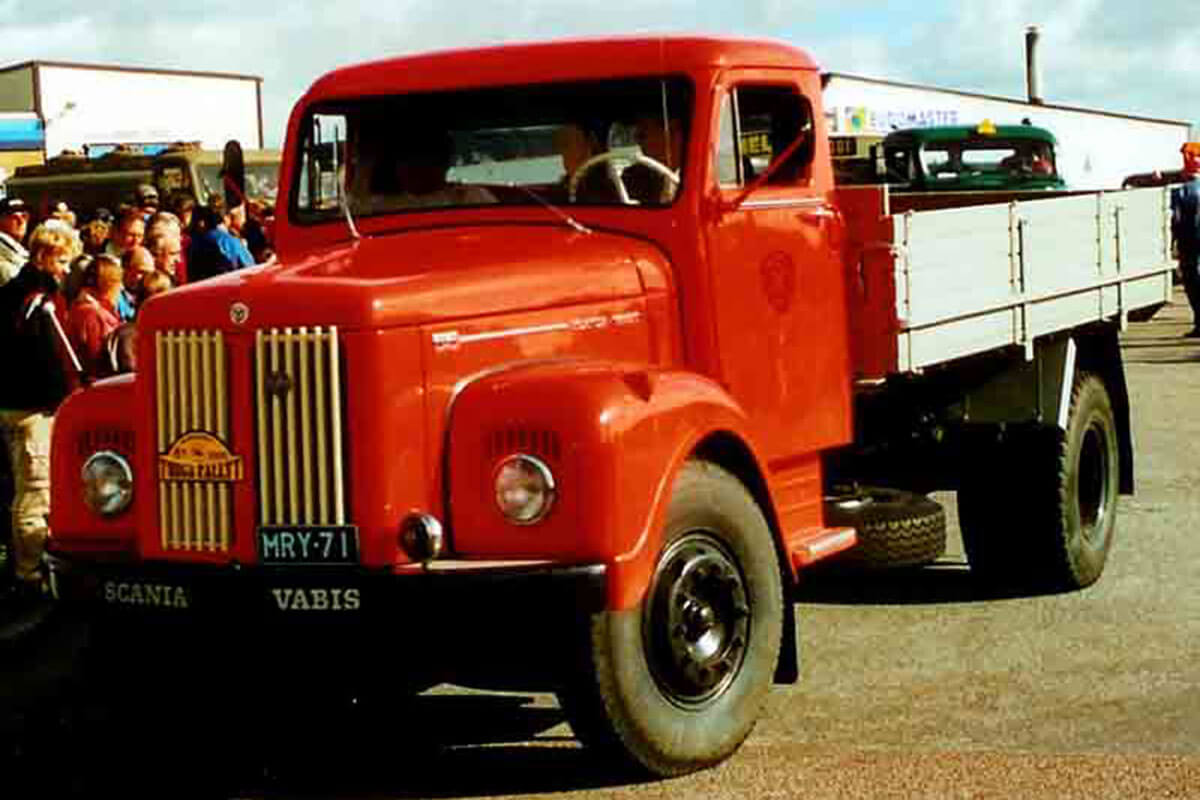 The story of Scania, the V8-shaped house of the Gryphon

In the Divine Comedy, Dante Alighieri described the journey to Purgatory in a chariot drawn by a griffin, the mythological creature with the head of an eagle and the body of a lion. It is hard to know whether, at the beginning of the 20th century, the founders of Scania took inspiration from this very passage in the Florentine writer’s work to design the brand name of one of the most famous and emblazoned truck manufacturers of all time. We are, of course, talking about Scania, the Swedish giant based in Södertälje, a leading player in the industry with its V8s that made an era. Let’s take a look back at the history of Scania and discover the milestones that have led the manufacturer to the top of its class.

Scania, over a century of heavy transport

A step back to Scania’s origins

The origins of what is now known as Scania AB lie in the more distant past, even before the merger in 1911 between the company Vabis and the company Maskinfabriks AB Scania. The history of Scania, in fact, began in December 1891, when in Södertälje in Sweden, engineer and entrepreneur Philip Wersen and steel manufacturer Surahammars Bruk founded a company dedicated to building railway wagons Vagnfabriks Aktiebolaget i Södertelge, better known by what in 1906 would become the company’s official brand name, Vabis.

Scania’s beginnings, at least initially, were characterised by good success. There was no lack of major losses, but even these played a major role in the consolidation of what is now the house of the Gryphon. In fact, in 1897 the manufacturer produced Sweden’s first four-seater car. Five years later, in 1902, Scania also built the first truck in its history.

The beginning of the 20th century, therefore, was a period of great prosperity for the company, which built a total of 323 vehicles. With increasing competition and rising rolling stock prices, however, the first losses for the company began. Due to the stagnation in rolling stock production, in 1907, the Vabis Board of Directors decided to establish a new engine and car company. During this period, the new company also undertook the construction of a new 3-tonne truck with a 20-horsepower engine. However, not even winning the gold medal in the international truck competition of the Swedish Royal Automobile Club in 1909 was able to lift the company’s fortunes and prevent total financial disaster.

The 1911 merger that gave birth to Scania

Faced with incessant losses, Surahammars Bruk tried in vain to sell the company. So, as the dramatic possibility of imminent closure began to appear in the background of Scania’s history, a glimmer of light finally arrived. It came from Per Alfred Nordeman, managing director of Maskinfabriks-aktiebolaget Scania. Maskinfabriks AB Scania was a company, founded in Malmö in 1900, that manufactured bicycles. In 1910, however, the company achieved success mainly in the production of engines, cars and trucks. Soon, therefore, the company set off in search of a partner who could take over the construction of the bodywork for its vehicles. A search that ended with Vabis: in 1911, the two companies were merged to create the new Scania-Vabis, today known as Scania AB, after the Latin name of the region, Skåne. The headquarters were built at Södertälje, and the first managing director of the new company was Per Alfred Nordeman.

Scania-Vabis breathes the harmful consequences of the Great War: 1914-1921

The outbreak of the First World War stopped Scania-Vabis’ exports outside the Nordic countries. The company, following the strategic plan of its CEO, chose to focus on the production of standard trucks. Despite Nordeman’s good intentions, however, a new period of quite significant losses began. Inflation caused by the war then played a key role and the resulting deflationary policy of 1919 led the company into an unsustainable situation, which prompted Nordeman himself, together with other executives, to resign.

Towards the end of 1919, the major shareholders and creditors were forced to intervene with the aim of reviving the fortunes of Scania-Vabis. A new managing director was also appointed for this purpose, but this was not enough to stop the strikes, redundancies and losses, which continued to accumulate until the company was driven into liquidation.

Scania-Vabis reborn after liquidation: the 1920s

At the beginning of the 1920s, however, with the aim of limiting losses, a new company was founded under the original name, AB Scania-Vabis. This period in Scania’s history, therefore, represented the company’s rebirth: despite the difficulties of post-war reorganisation, in fact, the new managing director, Gunnar Lindmark, had an ingenious intuition: that of betting everything on engines. Scania’s engines were powerful, robust and fuel-efficient. Exactly what hauliers needed in those years.

In 1922, August Nilsson of Scania-Vabis patented a new carburettor and in 1923 he developed a four-cylinder, overhead-valve engine that would be the key to Scania-Vabis’ success. In 1925, the new truck design and the start of the distribution of marine engines, ordered by the Swedish customs service, contributed to the survival and subsequent revival of the new Scania-Vabis.

During the 1930s, the company began a profound change: in those years, Scania had around five hundred employees, some of the best workers in the Swedish engineering industry. Thanks to these skills, the company was able to build vehicles for the Swedish armed forces during the Second World War, making high profits and increasingly converting to the war industry. In the meantime, the new managing director, engineer Carl-Bertel Nathhorst, with the intention of revitalising the company, established new personnel and improved management positions. This led Scania, especially in the post-war period, to numerous achievements in the ‘civil market’. This path, in particular, was taken with the introduction of the Scania L20/L60/L71 series. These trucks, introduced from 1946 onwards, represented the manufacturer’s emblem and, at the same time, a new standard for the entire haulage industry.

Scania’s success since the 1960s

There were many successes and production efforts in the post-war period. Not surprisingly, it was during these years that the first production plant away from Södertälje was opened. The choice fell on São Paulo, Brazil, while gradually the parent company began to make its way into France and Germany, giving stability to the entire group.

During this period, with the restrictions introduced by the trucking regulations in the 1960s, Scania-Vabis abandoned the previous cab, introducing the first LB100 advanced cab. The purchase of new plants, production relocations and, in particular, the introduction of the new V8 engine with 350 hp maximum power and 14.2 litres displacement, pushed the manufacturer’s sales ever higher. Year after year, in fact, the number of registered Scania-Vabis increased more and more.

The Scania story, however, continued successfully until the 1980s, when the company launched the second series of its vehicles. During these years, the company also began to produce customised vehicles according to customer requirements. Scania’s breakthrough year, however, came in 1989. As the 1990s approached, the third series of vehicles, introduced between 1987 and 1988, was awarded the prestigious Truck of the year award.

As Scania expanded, it went on to conquer increasing shares of the European market. This, in particular, was realised with the launch of the fourth series of Scania vehicles. It was in 2000 that the company produced its one millionth vehicle. An achievement not for everyone. The growing success of the Scania vehicles prompted the manufacturer to design a new V8: with a displacement of around 16 litres, the engine was able to produce a maximum output of 580 hp.

The house of the Gryphon from 2010 to today

In 2010 Scania produced a new version of its famous V8 engine, which promises to be the most powerful in the world and the most environmentally friendly: the first Euro VI trucks in Europe were introduced by Scania in 2011. The choice has positively influenced sales, allowing the company to gain new market share and a reputation as a sustainability-conscious company.

Scania’s recent history, in fact, puts the climate issue first. The company is introducing new fuels such as bioethanol instead of fossil fuels. Thanks to this solution, Scania is able to reduce emissions by up to 70 per cent. 2016 is also the year of the new R-series, which is designed above all for convenience and comfort during transport, but the absolute novelty for cabs is the S-series, which gives new meaning in terms of space and visibility. A further step forward in environmental terms comes in 2019 with the presentation of NXT: a new way of understanding urban transport, for an electrified and sustainable future.