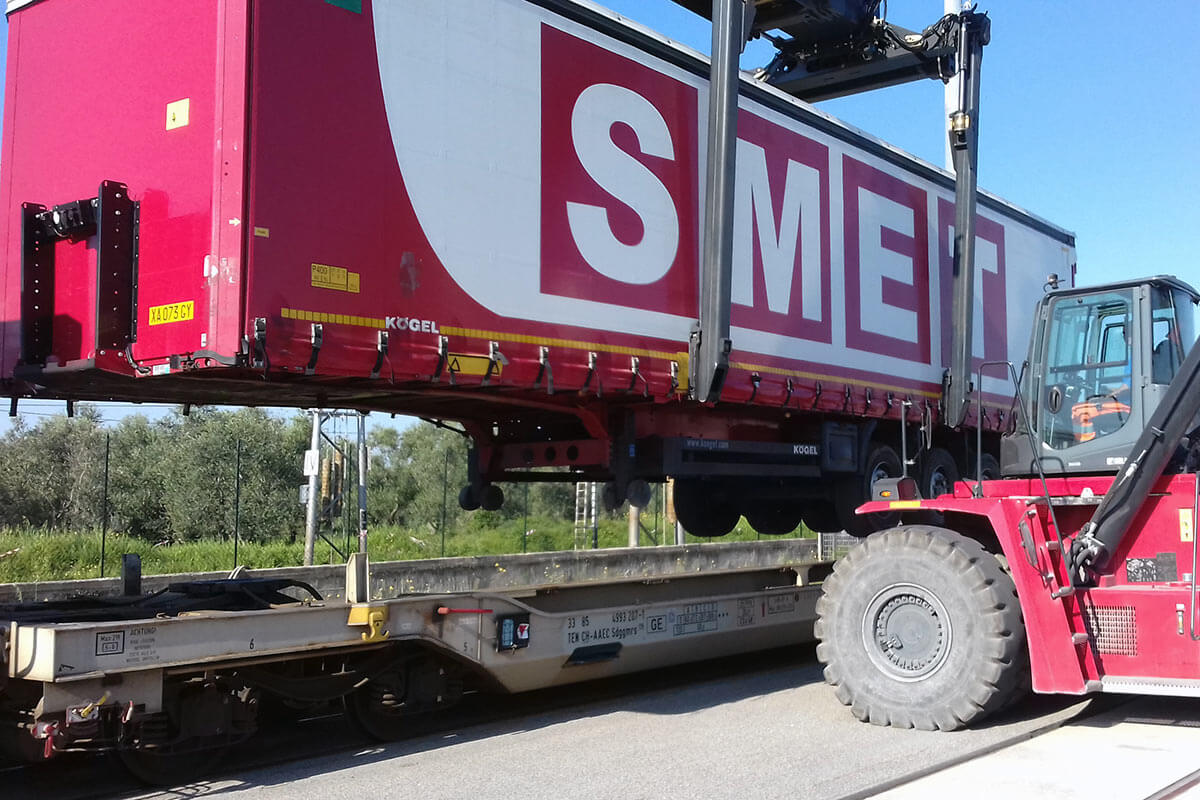 Domenico De Rosa: «Twenty years ago we realised the great potential of intermodal transport by sea and rail at an early stage and made a significant contribution to its development. Today, on the maritime side we move over 3,000 vehicles per week on ships, while on the rail side we operate 16 company trains per week. We are Europe’s leading intermodal logistics operator, with 30 locations throughout Europe, a fleet of 5,500 trailers and more than 2,000 employees», says Domenico De Rosa, CEO of the SMET Group. «We consider environmental protection an absolute priority and for this reason we have been pioneers in the decarbonisation of road transport in Italy and Europe, thanks to the use of alternative traction to diesel. We have been using LNG vehicles for some years now and are looking with great interest at electric and hydrogen power. The greening of road transport is perfectly in line with the development of intermodality and with the EU’s target of a 30% reduction in emissions by 2030».

The Medi Telegraph: How has your work changed since the explosion of the health emergency?

D. D. R.: The emergency has highlighted all the advantages of intermodal transport, also from a purely health point of view. Maritime and rail intermodality has very high safety standards and favours a type of freight transport that we can define as virus free, since it significantly limits interactions between people. Just think that only 15 people are needed to load 250 trailers onto a ship.

D. D. R.: «2021 is a turning point for intermodal transport and logistics, thanks to the arrival of the Grimaldi Group’s environmentally friendly Giga Navi ships, which are deployed on the Tyrrhenian coast and in just a few months have already revolutionised ro-ro traffic and the organisation of transport. We foresee a very strong boost to intermodal traffic, which is why we have already ordered 1,000 additional semi-trailers and expect to hire around 200 new people».

T. M. T.: What do you think of the state of health of the infrastructure in our country?

D. D. R.: «The state of health of our motorway network is very critical and does not allow the rapid and efficient movement of goods, especially in certain areas of the country such as Liguria, the Apennine ridge and southern Italy. Delays and traffic jams are the order of the day and often hinder access to ports, which are the real driving forces of our economy and should be put in a position to receive and create wealth. I am confident that the Recovery Plan funds will be used correctly in order to definitively repair the entire Italian infrastructure system».

T. M. T.: What are the main problems of the Italian logistics cluster today?

D. D. R.: «Even in 2020, at the height of the health emergency, the logistics sector generated a total turnover of 78 billion euros and employed over 1 million workers. In spite of these figures, there are widespread flaws and criticalities in the system: I am referring, once again, to the inefficiency of the infrastructure, which today costs us as much as 70 billion a year. What happened at the end of March, with the blockage of the Suez Canal for six days, is a clear example of the repercussions that serious infrastructure inefficiency can have on the world economy. The emergency of the last 12 months has also highlighted a number of weaknesses on which we need to invest in order to resolve them: among these I would put in first place a further and decisive strengthening of intermodal transport and the strengthening of local distribution».

D. D. R.: «First and foremost, the resilience of a sector that has shown itself capable of withstanding the impact of this pandemic and many other difficult conditions, relying solely on its spirit of adaptation and its desire for innovation. The digitisation of transport, storage and ordering is now a reality for the vast majority of companies, which have created new business paradigms and paved the way for the emergence of logistics 4.0.».