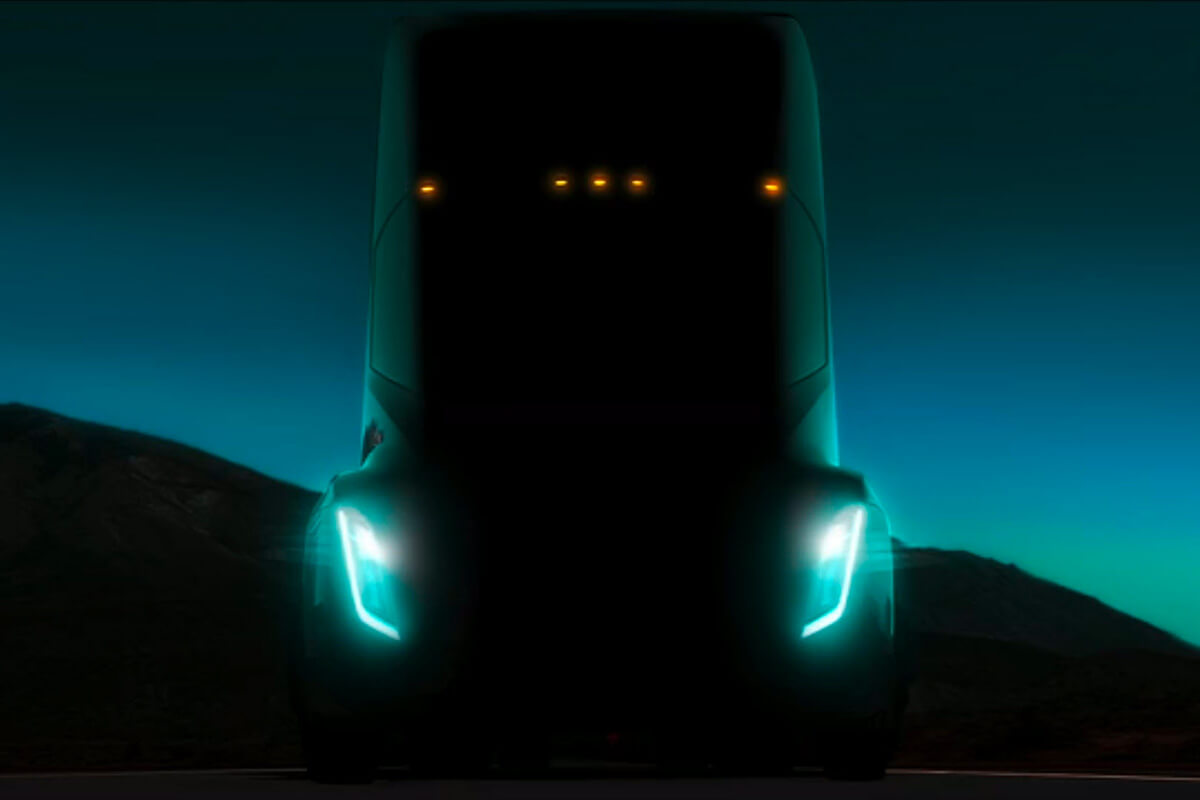 According to observers from the freight industry, 2019 will be the year of electric trucks. Only time will tell whether this will be the case in the future, but in the meantime the main brands in the sector are already putting heavy cavalry on the field. Not only liquid natural gas trucks, then, but also the first electrically-powered trucks. Let’s find out, then, what are the principles of this technology and the latest news about the electric truck.

Contrary to what the recent use in the automotive sector might suggest, the electric motor for automotive is, in reality, a technology successfully adopted since the nineteenth century. Already in the 1930s, in fact, electric motors were tested on board coaches and, later, with the improvement of batteries, also on board the first rudimentary cars. It was in these cars, in fact, that the first records were set: this is the case, for example, of La Jamais Contente, the first car to exceed 100 km/h. Despite these results, at the beginning of the 20th century the first internal combustion engines replaced the electric ones. Their development, however, did not stop altogether. Throughout the century, small car manufacturers tried their luck with their electric vehicle models. Until, at the end of the twentieth century, even the big car manufacturers took on the challenge. Since the 1990s, and as technology has refined, electrically-powered vehicles have multiplied in the marketplace. Not only cars, but also the first electric trucks. Before we dive into the latest innovations in the sector, however, we understand how an electric motor for motor vehicles works.

The electric motor for motor vehicles: how it works 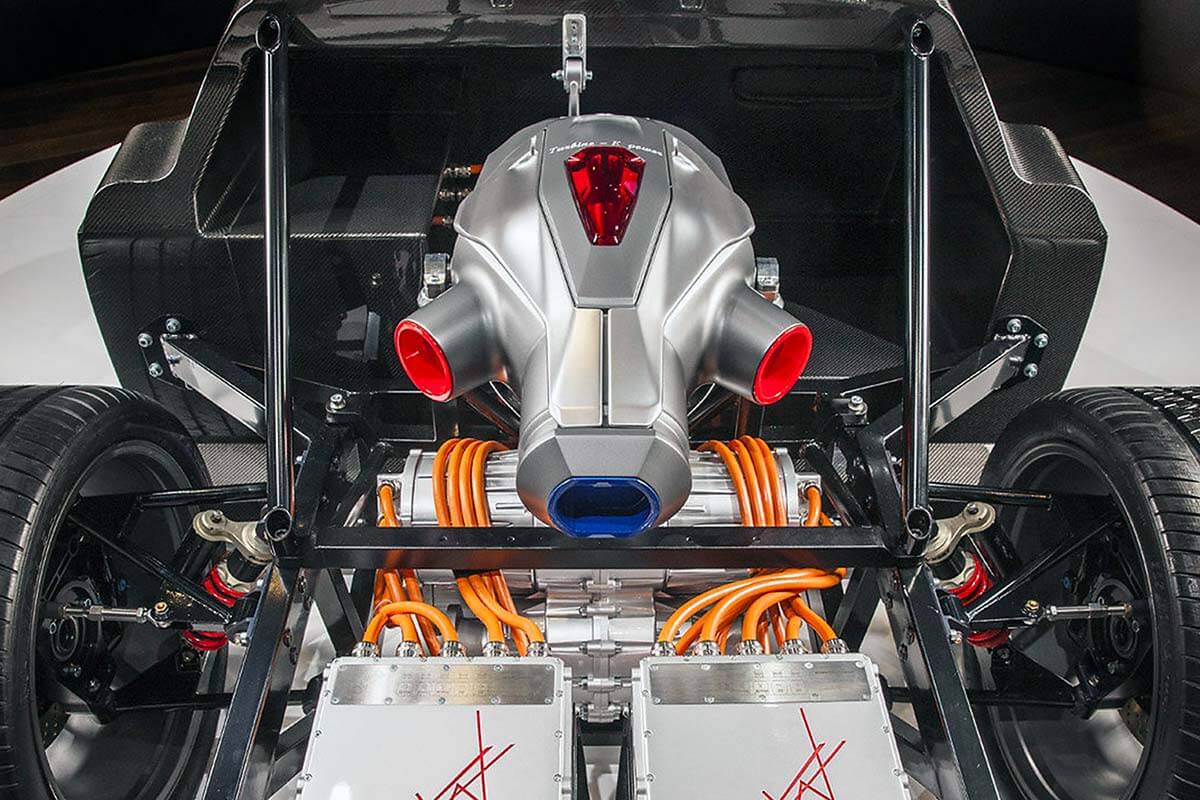 The principle is simple: an electric motor, using the energy stored in an accumulator, provides mechanical energy. It is a principle that, especially for the male public, they have often had the opportunity to experiment with their radio-controlled machines. Clearly, compared to the latter, the technology used in an electric car or truck is infinitely more complex.

Essentially, in an electrically-powered vehicle, there is an accumulator – commonly called a battery – a modern version of the tank of traditional cars, which stores electrical energy. It is to it, to its storage capacity and other characteristics, that we owe the autonomy of the vehicle. The energy of the accumulator, however, cannot be supplied directly to the electric motor. The electric motor can only supply direct current, while the electric motorsrun on alternating current. For this reason, the current is transferred to the motor by means of the so-called inverter, which performs its task of transforming direct current into alternating current. Only in this way is electrical energy free to flow inside the electric motor.

The electric motor, which is much simpler than an internal combustion engine, consists mainly of two elements: the stator and the rotor. The first, as the name suggests, is the fixed part of the engine. It consists of copper windings and generates electromagnetic fields opposite to those of the rotor. The latter, on the other hand, represents the moving part and is made up of permanent magnets. Without going into too much detail, the interaction between the magnetic field of the rotor and that of the stator generates the mechanical energy necessary for mechanical traction.

Moreover, since the electric motor is also a “dynamo”, during the braking phase it is able to transform mechanical energy into electrical energy. A feature that allows the accumulator to be recharged while driving.

The advantages of this technology are numerous, both in terms of economic savings and environmental impact. In fact, the emissions of an electric vehicle are substantially reduced to zero. Also in terms of operating costs, these are extremely low compared to a vehicle driven by an internal combustion engine. It is clear that, in view of these advantages, electric motors have also been seen as one of the possible novelties of the future in the freight transport sector, and more generally in logistics. Who has already taken the big step? The list is long, let’s see them in detail.

Tesla: after the cars, now the electric trucks 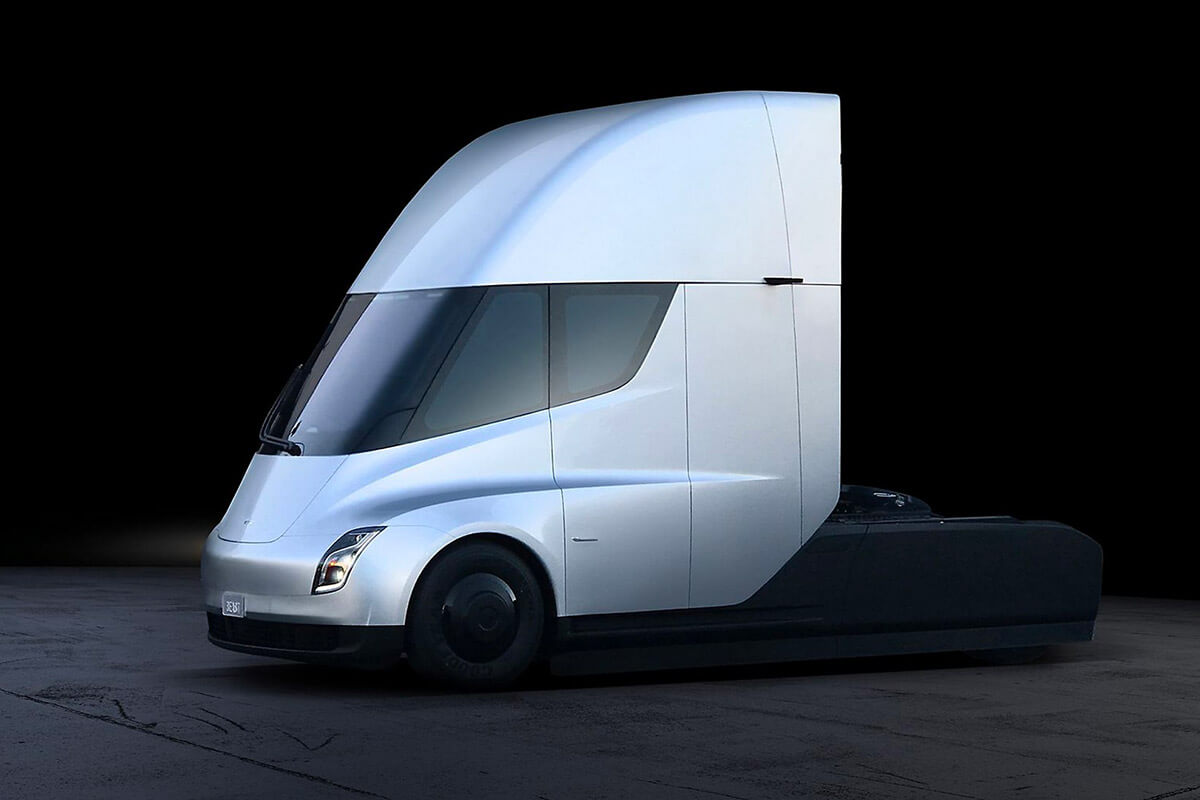 Tesla’s founder, Elon Musk, was perhaps the first to really believe in the potential of the electric motor for motor vehicles. After the first cars, therefore, the brand decided to experiment with technology in freight transport. The electric truck launched by Musk, probably already on the market since 2019, is called Tesla Semi.

It is a truck equipped with four electric motors, connected to the four rear wheels. In particular, it is the engines mounted on board the Model 3, capable of a power of 271 hp, for a total power of 1,084 hp. The batteries, located below the driver’s cabin, will allow acceleration from 0 to 100 km/h in about 5 seconds. The company’s declared range, on the other hand, is between 500 and 800 kilometres on a single charge. Recharging that, through the Tesla Supercharger stations, can be done in just 30 minutes. With the Semi, according to the calculations of the parent company, in just one year you can save about $ 200,000 in fuel.

Nikola and the double offer of electric trucks 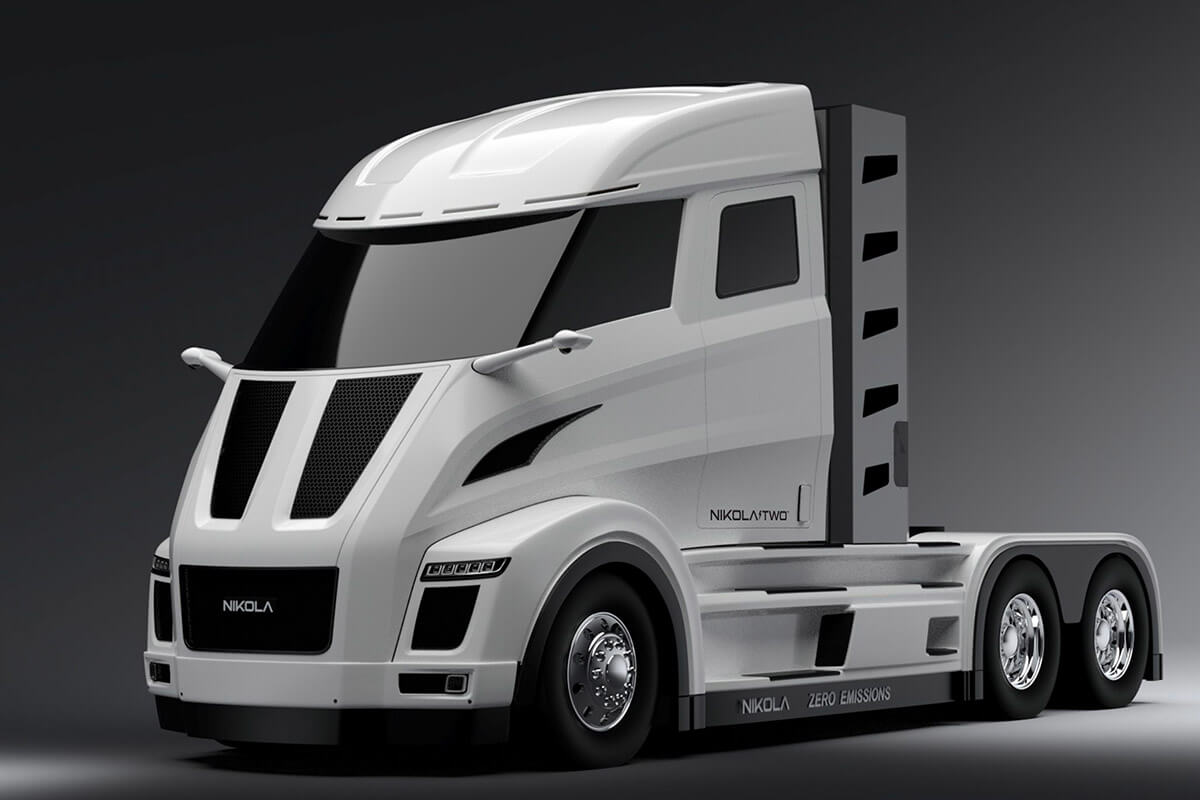 Next to Tesla, of course, could not miss Nikola, named after the brilliant inventor. The American company is also now ready to produce the first electric trucks. In fact, by 2021 two engines should be made available: the Nikola One and the Nikola Two. Both models, which differ only in the cockpit, are equipped with an 800 Volt engine and 320 kWh batteries. Thanks to this, One and the Two deliver 1,000 hp and 2,712 Nm of torque.

Alongside the engine and battery – and this is the main difference with competitive models – the two electric trucks are equipped with a fuel cell. It is a fuel cell powered by hydrogen stored in a tank. Re-fuelling, therefore, takes place at distributors that supply hydrogen. According to the manufacturer, with re-fuelling taking only 15 minutes, it is possible to travel from 1,200 to 2,000 kilometres. The high power of Nikola’s electric trucks also allows for high load capacities. 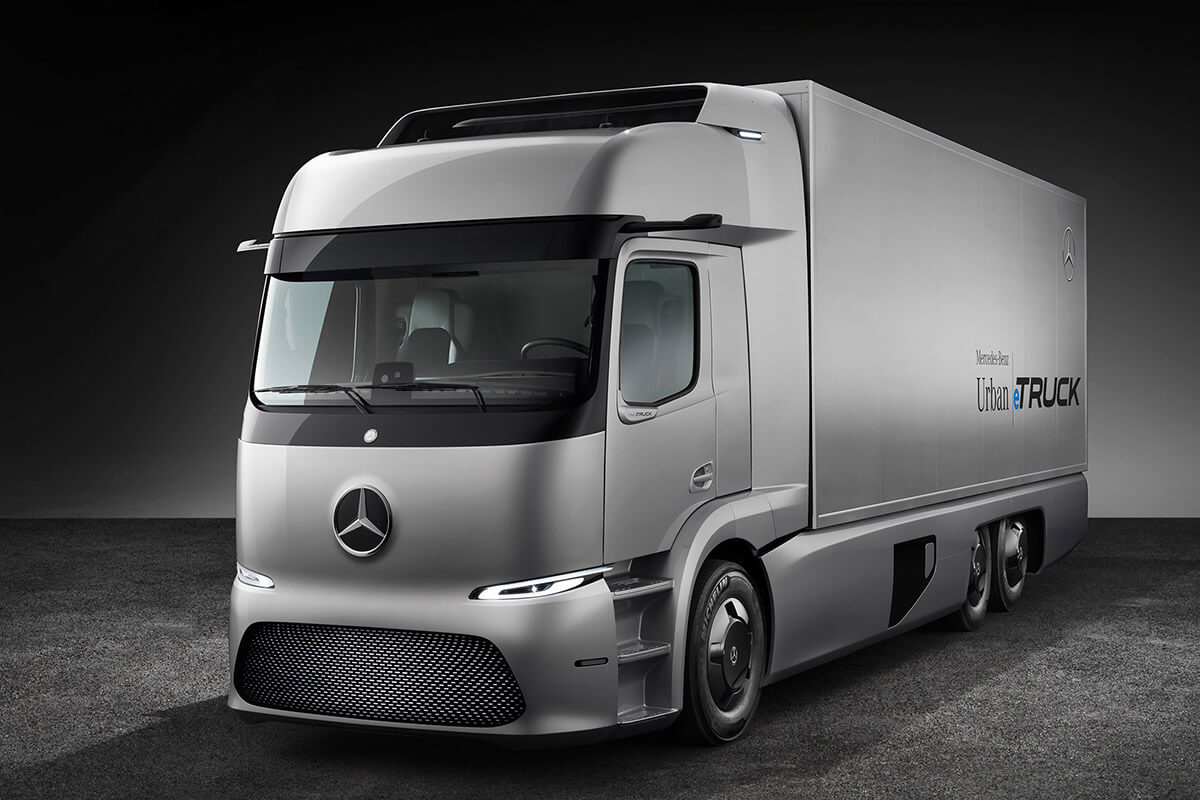 After testing with eActros, Mercedes is now ready for its first electric heavy vehicle. The German company’s truck is called Mercedes Urban eTruck. The truck is equipped with a 212 kWh battery and two engines that, in total, are capable of delivering 335 hp and a torque of 1,000 Nm. Thanks to this equipment, however, the Mercedes electric truck can carry up to 25 tons (12.8 tons of payload) and covers more than 200 kilometers. 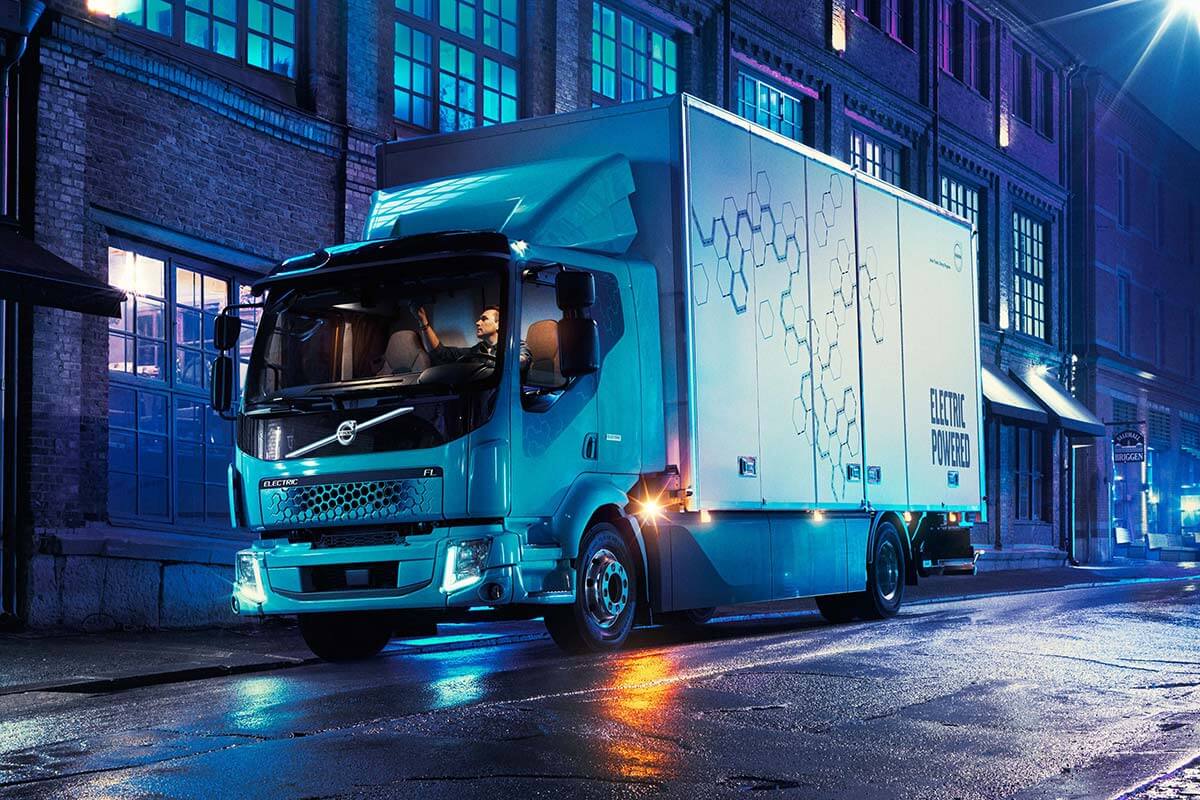 Volvo is also working to bring its first electric vehicles onto the market by the end of this year. In particular, the Scandinavian company has already presented two vehicles: the Volvo FL Electric, designed to transport up to 16 tons, and the Volvo FE Electric, capable of transporting up to 27 tons. As for the first, the Volvo FL Electric is equipped with a 185 kW electric motor with a maximum torque of 425 Nm. Next to this, there is a system of modular batteries, from 2 to 6 cells, which can have a capacity ranging between 100 and 300 kWh. Depending on the charging system, normal or fast, the vehicle can take from 2 to 10 hours for a full charge. According to the data of the parent company, however, the maximum autonomy is 300 km in the city.
As for Volvo’s second proposal, however, the vehicle is equipped with an electric motor with a maximum power of 370 kW, equal to 503 hp, and a torque of 850 Nm. The battery system, as before, is modular and can have a capacity ranging between 200 and 300 kWh. Depending on the charging system and configuration, it can be recharged in a period of time from 1.5 to 10 hours. However, depending on the house, it is possible to travel up to 200 kilometres with the vehicle.

In addition to these, there are many other brands that are beginning to experiment with their electric vehicles. There is Iveco, for example, which has started experimenting with a commercial vehicle, with the Daily Electric. Renault, based on Volvo’s experience, should also start marketing its Maxity this year. The DAF group, on the other hand, has already presented the DAF LF Electric. All we have to do is wait and see for ourselves.