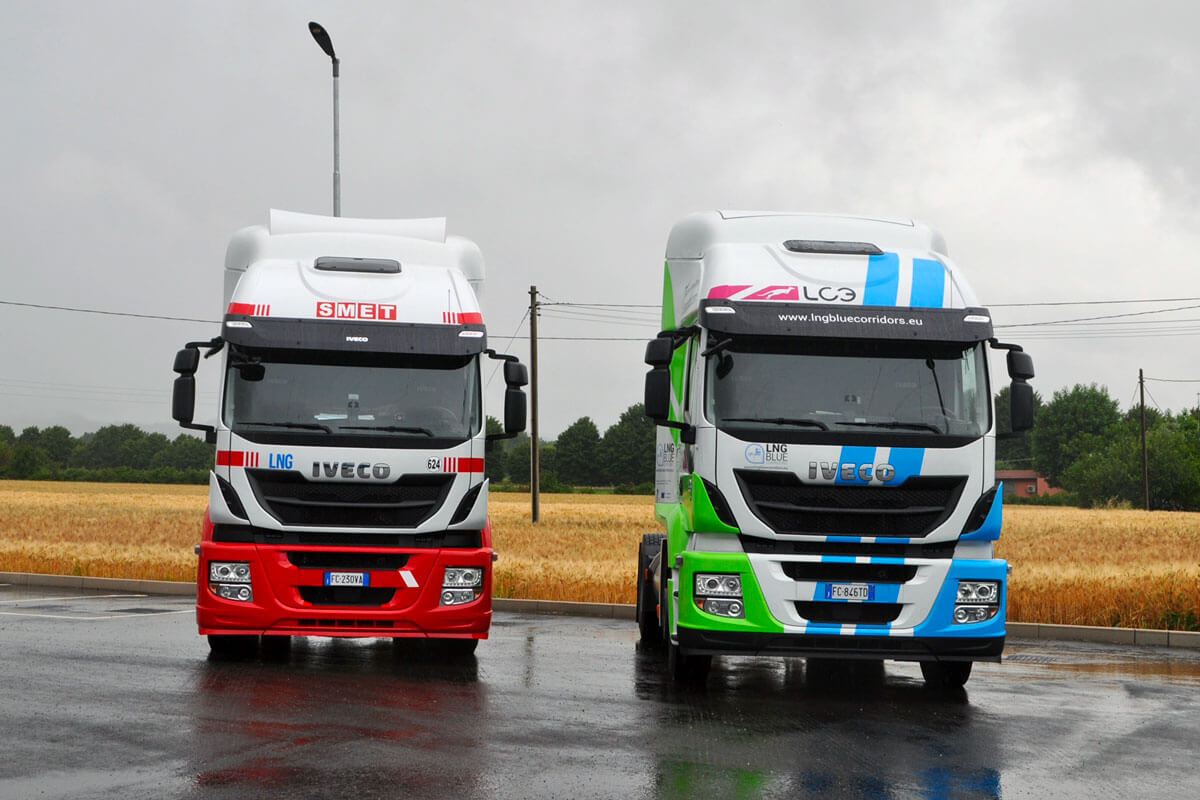 An eco-sustainable future for the world of road transport and, in general, for logistics exists. There are many roads that are opening up in recent years. Some of them are already accessible. This is the case of vehicles powered by natural gas, a fuel that is certainly less polluting than diesel, which already powers some heavy goods vehicles. One of them is certainly Iveco Stralis LNG where, for the uninitiated, the abbreviation LNG stands for liquefied natural gas.
We all know the Stralis, in fact: an extraordinary vehicle that has had great success all over the world. Both on narrow Italian roads and on Australian highways. Until now, however, Iveco Stralis had always been powered by a diesel engine. Since 1995, however, Iveco has focused its attention on gas propulsion. This commitment has enabled the company to become a European leader in the sector of commercial and industrial vehicles powered by natural gas. To the point that, at present, there are about 11,000 Iveco natural gas-powered vehicles in Europe, both for private companies and in public administrations. The new Iveco Stralis LNG, in fact, thanks to its methane fuel system, has revolutionized the world of road transport. Let’s discover this means of transport.

The Iveco Stralis LNG, as mentioned, is the natural fuel version of its older brother Iveco Stralis. In particular, in the Stralis LNG natural gas is stored in liquid form in cryogenic tanks. This means that the methane, used to power the engine, is stored at -125 °C in the tanks, from where it is directed to the engine, after being passed through a heat exchanger.
The new engine of the Iveco Stralis natural gas engines is called the Cursor 8 LNG. A 330 hp engine with manual transmission, Intarder and EBS as standard. This engine can be powered either by natural gas, a mixture of gases of which methane is present in a higher percentage (84%). Both biomethane, a fuel which, having undergone a further upgrading process, i.e. refining and purification, has a percentage of methane that can reach 98%.

Iveco Stralis methane vehicles, therefore, can cover applications from 18 to 40 tonnes. Moreover, their versatility makes them ideal for regional and national distribution. In fact, the configuration with 4 70-litre CNG cylinders and a 510-litre LNG cryogenic tank makes it possible to cover more than 750 kilometres.

Advantages of an Iveco Stralis LNG

The use of motors powered by liquid natural gas has several advantages. Both in terms of emissions into the atmosphere and fuel consumption. As a result, gas-powered vehicles offer environmental and economic advantages. Let’s take a closer look at them.

The use of LMG vehicles, such as Iveco Stralis, has numerous ecological advantages, making it the most eco-sustainable solution in the road transport sector. Compared to a vehicle equipped with a Euro 6 certified diesel engine, in fact, there is a reduction in emissions, both in terms of particulate matter and in terms of NOx and CO2 emissions. In particular, the quantity of particulate matter is 95% less than that of a diesel engine. For NOx, on the other hand, emissions fall by 35%.
Finally, a separate point for CO2. In this case, emissions drop from 10% to 100% when using biomethane. This allows it to be used in motor vehicles, with a consequent reduction in greenhouse gas emissions.
The reduction of emissions, however, does not only concern gaseous emissions. Compared to a diesel engine, the natural gas engine also reduces average noise emissions by 5 decibels. This makes natural gas vehicles ideal for both urban transport and night-time use.

As mentioned above, LNG transport does not only offer ecological advantages. In addition to these, it is also possible to extract economic benefits. Starting with the reduction of fuel costs. Compared to diesel, natural gas costs up to 40% less. In general, the total cost of ownership can be reduced by up to 10%.
In more concrete terms, estimates have made it possible to calculate that over approximately 40.000 kilometres travelled over the course of a year for regional distribution missions, the economic savings obtained compared to a diesel-powered vehicle amount to approximately 10.000 euros. This saving becomes even greater with regard to waste collection missions. In this case, estimates have made it possible to calculate savings of up to 20 thousand euros over a year. 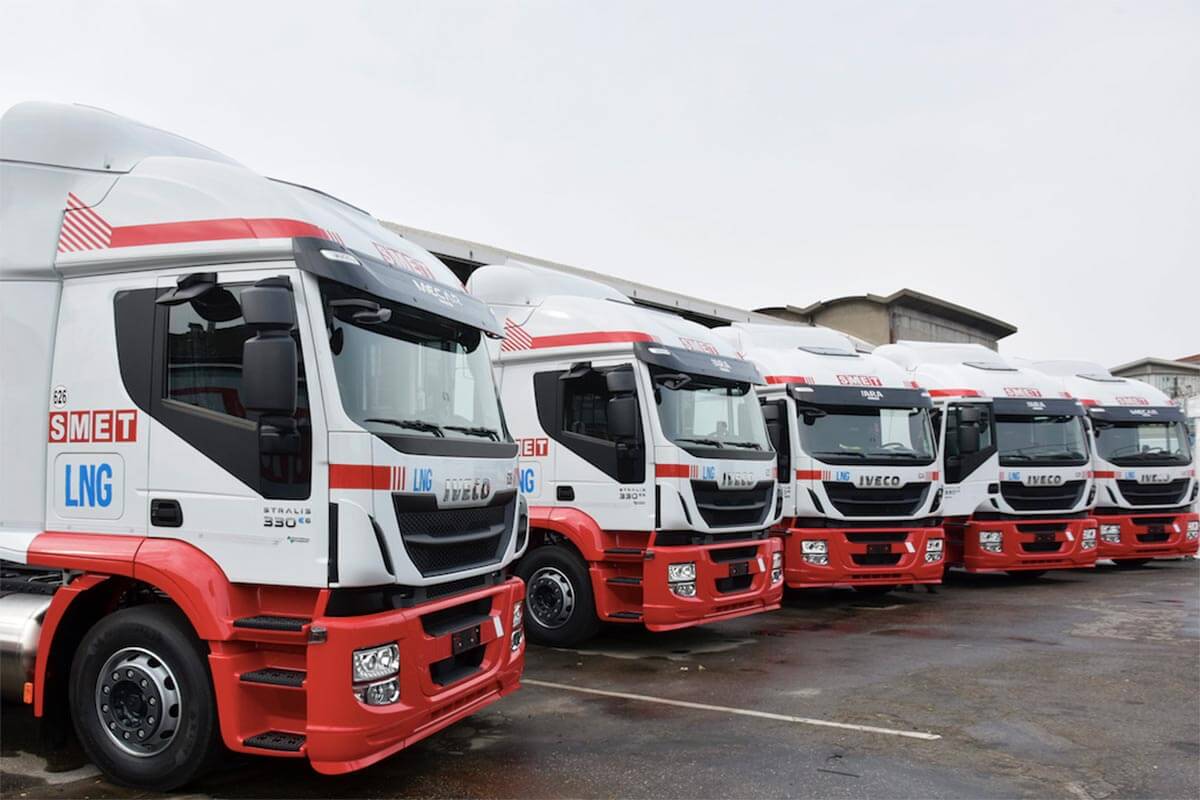 For all these reasons, Iveco Stralis LNG are the vehicles chosen by Smet De Rosa for its fleet of vehicles. Thanks to an agreement with Iveco, in fact, the company chaired by Luigi De Rosa has created a new fleet of methane gas vehicles. A choice in line with the principles of the company, which has always aimed to reduce the environmental impact of its road transport and make logistics increasingly environmentally friendly.