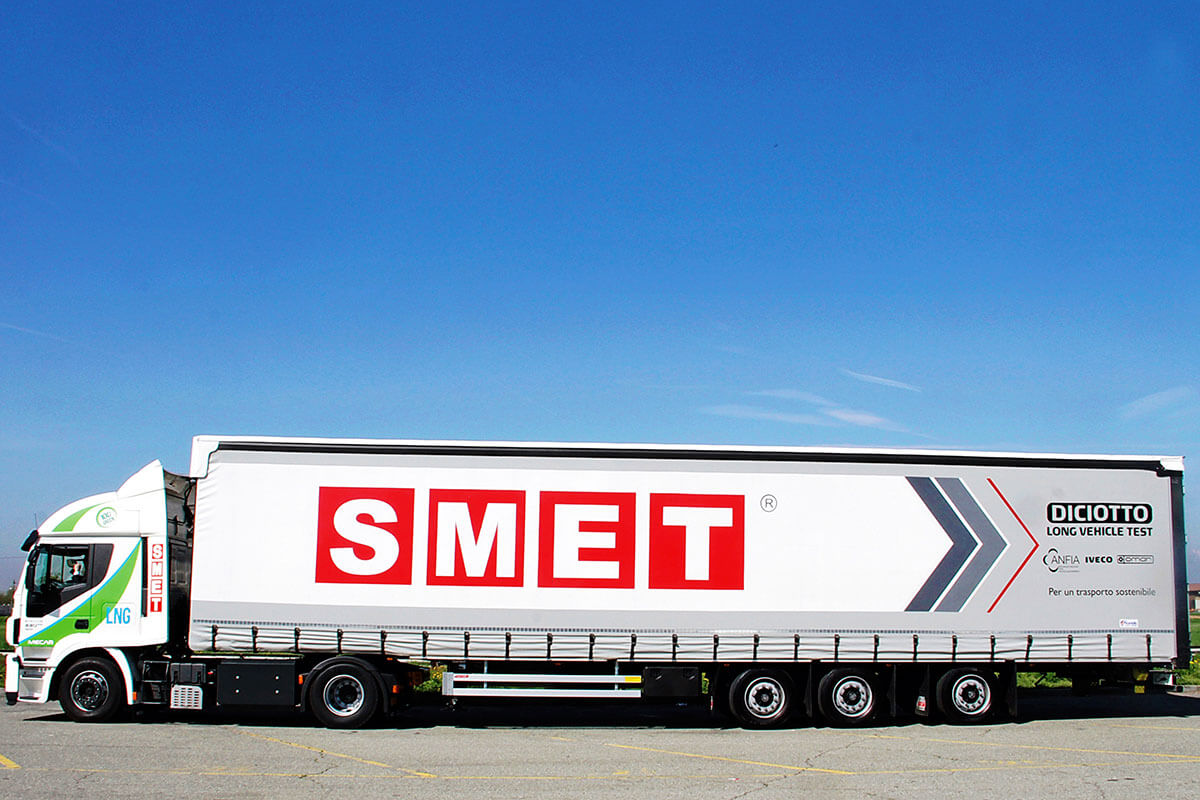 The second phase of Project 18, an experimental programme promoted by Anfia, the national association for the automotive industry, to which De Rosa’s Smet also belongs, has begun. The project, as the name suggests, aims to assess the productivity advantages of transport, using articulated trucks with a length of 18 meters.
“Project 18, promoted by Anfia, the national association for the automotive industry, is of fundamental importance in terms of the sustainable and productive development of road transport – explained Domenico De Rosa of Smet – We hope that this second experimental phase, currently underway, will be followed as soon as possible by an even more incisive third phase, with a number of licences for vehicles of extraordinary dimensions higher than the current 300, closer to the large numbers already successfully tested in other European countries”.

Project 18: Anfia and Smet together

Project 18 was launched by Anfia in June 2009, with the delivery of the first batch of experimental semi-trailers. Thanks to special authorizations granted by the Ministry of Transport, some companies were authorized to use vehicles of extraordinary length. Unlike standard vehicles, which have a length of 16.50 metres, the experimental articulated lorries have a length of more than 1.5 metres. This means that, while using standard tractors and keeping the overall mass unchanged, it is possible to increase transportability.
Compared to a standard articulated truck, which is able to transport 33 europallets, the articulated trucks of Project 18 are able to transport 37 euro pallets. A number that is close to that possible with a truckload, equal to 38 euro pallets, which however has a length of 18.75 meters. A load for Iveco with a standard trailer allows the loading of 22 loading units arranged on two levels, while an experimental trailer allows the loading of 4 more units, ie 26 loading units always arranged on two levels.

The objectives of Project 18

Through the testing program, Anfia has intended to evaluate the performance of new media. The objective of Project 18, first of all, is to compare the convenience in economic terms with the 16.5-meter vehicles. However, the economic one is only one of the terms of comparison. In addition to this, the focus was also on the organisation of transport logistics, road performance and manoeuvrability of vehicles, according to the drivers. Last but not least, the safety of longer vehicles.

71 companies took part in the project, including Smet by De Rosa, for a total of 162 vehicles. For the survey, questionnaires were also administered to the heads of the Traffic Office, as regards the economic and organizational aspects, and to drivers, as regards the aspects of maneuverability and safety of vehicles. «Smet was the first Italian company to join Project 18 and today we have the majority of licenses issued by MIT for centered vehicles – adds De Rosa – We are currently testing a vehicle of 18 meters, with a much greater load capacity than standard vehicles of 16.50 meters. As proof of the daily commitment to sustainable transport – concludes De Rosa – at the end of 2016 the Smet group was awarded the prestigious Sustainability Award by Cnh Industrial for the introduction of ecological, economical and efficient road transport systems. We are in fact the only Italian company to use Iveco Stralis LNG, powered by liquid natural gas, combined with semi-trailers with an extraordinary length of 18 metres».

The results of the experimentation in the second phase

In February 2017, it was already possible to draw up an initial assessment of the experiment. After approximately 10 million actual kilometres, in particular on medium-long stretches (200 – 600 kilometres), no particular problems were reported. On the contrary, the results obtained appeared to be significant: for example, according to the heads of the traffic office interviewed, it was possible to find an average saving of 12% in terms of number of trips. According to 74% of the drivers, however, there are no differences between 18-metre trailers and traditional trailers. The same percentage of drivers, in fact, found no problems of manoeuvrability. On the safety front, the results were encouraging: 83% perceived the same safety and 7% even better, compared to 16.50-metre trailers. Finally, the most important question: has there been a deterioration in performance and, in particular, with regard to transport times? According to 92% of drivers, no. The umpteenth proof of the goodness of Project 18.