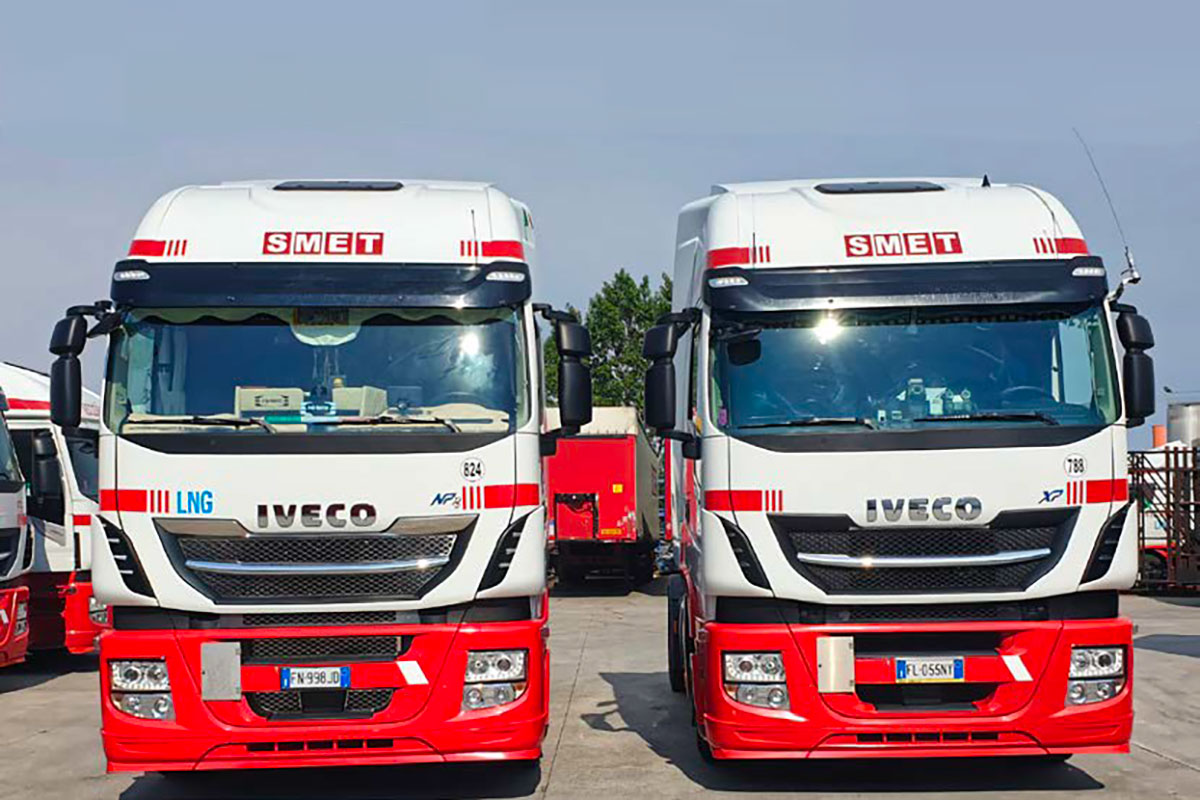 Let’s take two identical trucks, one powered by diesel (Stralis XP 440) and one LNG (always Stralis 460 NP). Let’s compare them and observe performance and costs impartially. We always talk about low emissions and eco-sustainability, but we have to see if, for example, there is also economic sustainability. In short, we want to know whether or not to choose the gas and say goodbye to diesel. To understand this, we turned to two drivers who drive every day, one diesel and the other LNG. But first let’s take a look at the Smet Group, which has allowed us to observe its vehicles and which, above all, is an important reality of Italian road haulage, particularly committed to reducing polluting emissions.

The Smet Group was founded in the immediate post-war period in Salerno, as the current President and CEO, Domenico De Rosa, tells us: “It all began with my grandfather in 1947. His name was Domenico and I inherited his name. At the beginning we brought the products of the land and basic necessities for that difficult period”. But between the ’50s and ’60s, in the midst of an economic boom, the company from Campania began to broaden its horizons. In 1975 Luigi (Domenico’s son), who was just 20 years old, arrived and started a real transformation. The company thus began to specialise in integrated logistics in the automotive, building glass and chemical sectors.

25 branches in Europe and North Africa

«Since 2008 – explains Domenico – I, the third generation of De Rosa, have been here and tried to give new impetus to European countries and today, in fact,  we have 25 branches in Italy, Spain, Portugal, Belgium, France, Germany, but also in North Africa». But Domenico has done more, he has also chosen a sustainable transport policy using the latest generation of Eco Truck vehicles, powered by LNG (Liquid Natural Gas). Currently, the fleet has more than 3,200 vehicles, 30% of which are powered by liquefied natural gas, but the objective is to reach 2022 with the entire fleet powered by LNG. Is this the right choice? Yes, of course, but let’s see what our two experts have to say about it. Let’s start with diesel…

Davide Passi’s Stralis, age 36, from Bergamo, has a latest generation Euro 6 diesel engine, the 440 S48 XP, and joined the Smet fleet in December 2018. It now has 148,000 km. «I inherited the passion of the trucks from my uncle – he tells us – and, as soon as I was the right age, I got my licenses. At the beginning I had experience with quarry trucks and then I moved on to large-scale distribution trucks. I’ve worked for Smet for almost two years. I’m very happy with the Stralis. Since it joined the company, I’ve been the only one driving it and it’s never given me any problems. Until recently I only travelled in Italy, now I also travel abroad: Switzerland, Germany, the Netherlands, Slovenia and Croatia. I’m mainly involved in glass transport. I travel an average of 20,000 to 25,000 km per month, usually on the motorway».

«Tonight XP – Davide takes up – has been designed for long distances and does not disappoint anyone. Among other things, it is one of the few 480 hp trucks on the market to have an 11-litre engine. A beautiful engine that pulls from low rpm effortlessly even at full load. In terms of fuel consumption, thanks to the automated Hi-Tronix gearbox and the devices provided such as the Eco-Roll and Hi-Cruise, which provides the trend of the road, on average I do the 3.6-3.7 km per liter. I often sleep on the truck and in fact inside I have everything I need: television, night air conditioning and refrigerator. The cabin has a high roof (almost 2 meters) and allows me to stand easly. In addition, the bed, 80 cm wide and more than 2 meters long with wooden slatted frame and reclining backrest does not make me regret that of my home». 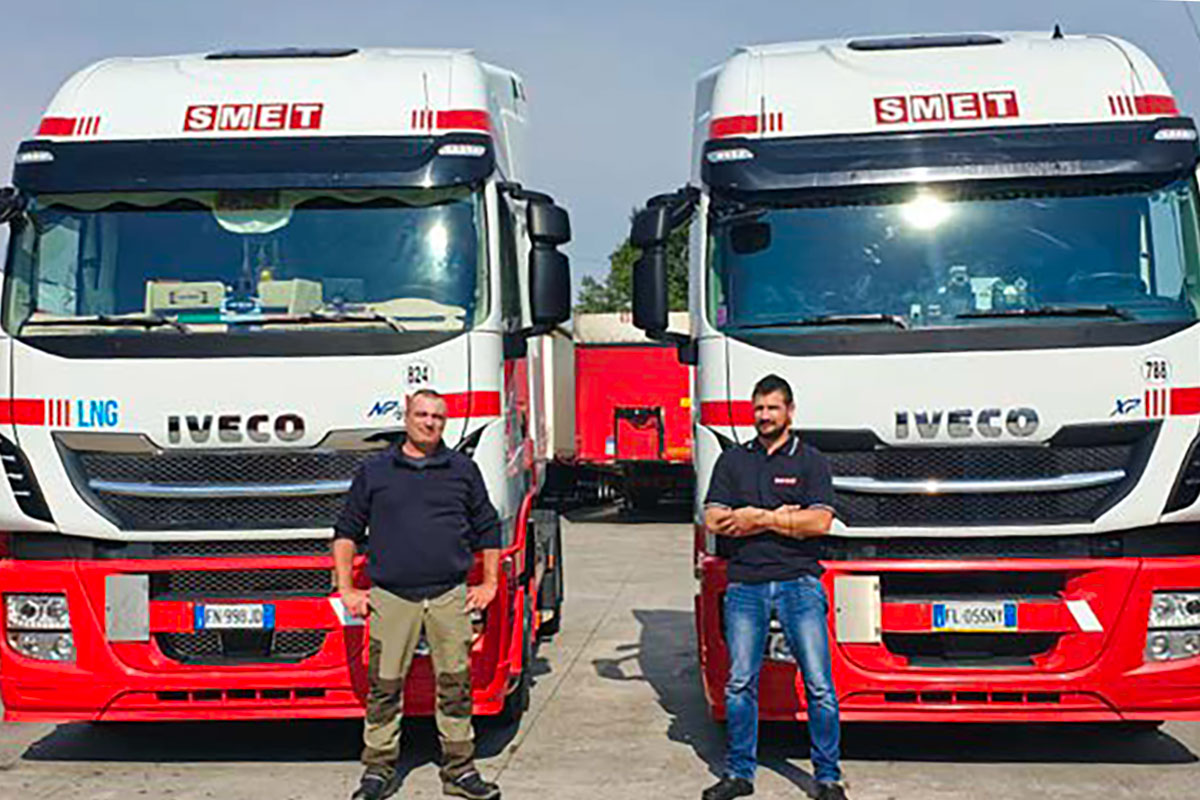 The Stralis NP features advanced LNG technology. The engine, a cycle 8 like petrol engines, is a 13-litre Cursor, powered by liquefied natural gas. It has 460 hp and 2000 Nm of torque, delivered at 1,100 rpm. «Even though my dream was to drive trains – says our friend – I’ve been driving trucks for over 24 years». In short, Boris Ferrari, 46, from Reggiolo (RE), has been Smet driver for a couple of years and he’s a man who knows what he’s doing. And he is an enthusiastic supporter of the Stralis NP: «I took it on last year. I have to say that this 460 hp engine doesn’t make you regret the 480 hp diesel that I drove before. I find it a gritty engine in spite of everything you think about gas-powered engines. When fully loaded, the slight difference in torque is not even noticeable».

Boris points out that «I only travel on motorways, but the performance of this Stralis is really exciting. On the contrary, the exuberance of the engine must be held in check. In fact, I almost always travel in economy mode. The truck is equipped with two 540 kg tanks. The company gives it for 1,600 km of autonomy, I was able to cover 1,800! In Italy, however, there is not even the problem of LNG distributors, because in recent years have greatly increased from north to south. Instead, in the rest of Europe it is still a problem, except in France and Spain. That’s why, when I go there, the company gives me an updated map of the refuelling points, so I don’t risk being left out. Also, the quietness of this engine is really comfortable, because when you get off, after a few hours of driving, you feel less tired».

Let’s say straight away: no one wins, because for the type of work they do, the two vehicles offer equivalent performance. What you save with the current cost of purchasing a diesel vehicle is then lost by paying more for the fuel. At the same time, however, the vehicle powered by LNG is more expensive to buy, but then allows savings that balance the rod of the total cost of exercise. However, this balance is already a point in favour of gas. Who would have thought that cycle 8 applied to heavy transport would have obtained such a competitive performance in a short time? And when it is possible to fill up with biogas, the environment will be even more protected. At least until the electric motors arrive, even for trucks. But that’s another chapter in our history…