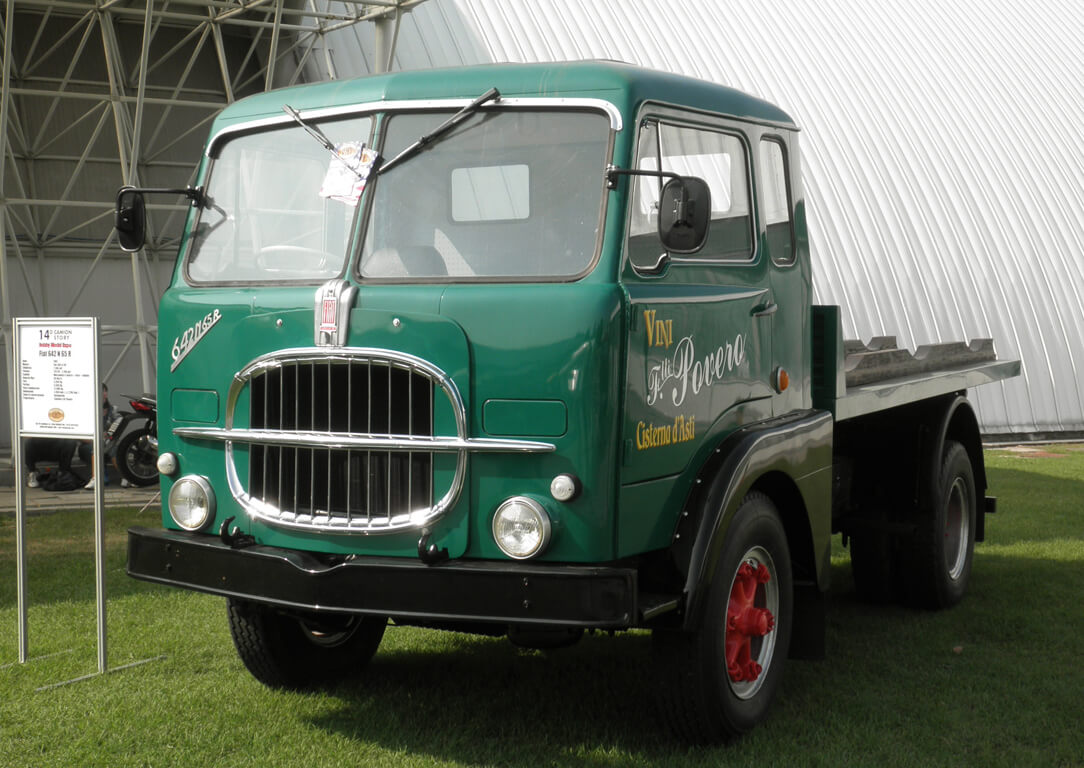 At the beginning of the Fifties, in an Italy that was trying to re-emerge from the ashes of the Second World War, what was then called Fiat Veicoli Industriali – and which today is known as IVECO – gave life to a legendary truck: the Fiat 642. With its peculiar design and powerful performance, this truck was one of the most appreciated of the company that created it. Let’s look back at the history of the Fiat 642.

Fiat 642: the Italian truck that could laugh

A few years after the world war, while Italy was struggling to revive its economy, Fiat Veicoli Industriali was working on the design of a new truck that could meet this challenge: the Fiat 642. While other Italian manufacturers of heavy vehicles – such as Lancia, with the Esagamma, and Alfa Romeo with the Mille – were trying to evolve their strategies, Fiat presented a vehicle with a rear cab. The main design feature of the Fiat 642 was the “moustache” grille, which gave the vehicle an almost smiling appearance. This aesthetic detail was one of the reasons why the Fiat 642 was appreciated, in addition to its versatility and performance.
The success of this Fiat truck was such that several versions were proposed: the Fiat 642 N, where the “N” stood for naphtha, the Fiat 642 T, where the “T” stood for tractor, and the Fiat 642 R, where the “R” stood for trailer.

Fiat 642 design: the Italian truck with a comfortable “mustache” cab

Despite the fact that, at the time, there were very few amenities that trucks offered to drivers, Fiat decided to design the cab of its Fiat 642 with the goal of accommodating drivers more comfortably. For this, the manufacturer equipped its 642 with a well-organized cockpit to improve interior space. The engine hood was insulated, so as to prevent the heat emitted by the engine from being transferred to the passenger compartment, worsening the comfort on board, especially on hot Italian summer days. The steering wheel was placed on the right and the two padded seats were lined in black leatherette, to offer an idea of luxury, with a headrest integrated on the passenger side. On the back then, in the versions used for long routes, there were one or two bunk beds, to limit the duration of driving and ensure the safety of both drivers.

The driving position of the Fiat 642 saw, in most versions, a Bakelite steering wheel with three spokes. The dashboard, on the other hand, consisted of a metal plate that grouped together the speedometer with daily and total odometer, rev counter, air barometer, water and oil temperature thermometer and various warning lights. The gearshift, on the other hand, included four gears and reverse and there was also a lever for half gears.

The Turin truck had a chromed grille, crossed by a chromed transversal bar, on a black bumper characterized by a rounded shape, a feature that led many people at the time to rename this truck as “the truck that laughs”, a symbol of an Italy that was heading towards the economic boom.

Engine and components: what were those of the Fiat 642?

The much-appreciated Fiat 642 truck was equipped with a six-cylinder engine, with a total volume of 6,032 cm³, capable of delivering between 92 and 100 hp at 2,000 rpm. As for the engine’s power supply, Fiat introduced both the classic version, which ran on gasoline, and the Fiat 642 N, which ran on naphtha.

The tires of the Fiat 642 were high and strong, partly notched to allow for greater grip on uneven road surfaces or in adverse weather conditions. In particular, the rear tyres were arranged in a parallel pair, while the front ones were arranged individually. The rims were also reinforced because they had to support, in most cases, several tons of weight. Also the choice of the windows was not left to chance: they were sliding and the last two that constituted the windshield could be opened slightly from the outside, so as to obtain a better ventilation in summer.

The Fiat 642 has gained a prominent place in the memory of all fans of vintage Fiat trucks. With its particular design features and performance, in fact, it conquered the roads of post-war Italy, becoming one of the most appreciated trucks in history.